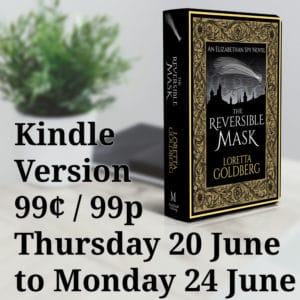 The kindle version of The Reversible Mask is on offer at the moment at 99c/99p as a kindle countdown deal:

Order a copy at http://getbook.at/reversiblemask

Conflicting passions—patriotism and religion—wage war in his heart. On this day, religion wins. Sir Edward Latham throws away his title, kin, and country to serve Catholic monarchs abroad.

But his wandering doesn’t quiet his soul, and when Europe’s religious wars threaten his beloved England and his family, patriotism prevails. Latham switches sides and becomes a double agent for Queen Elizabeth. Life turns complicated and dangerous as he balances protecting country and queen, while entreating both sides for peace.

“This is a glorious novel! Rich in detail and atmosphere, jewel-like in its creation of Elizabethan England, it’s the best kind of historical fiction, transporting readers to a captivating time and place and story. Goldberg does a magnificent job of conveying the intrigue, passion and sometimes sheer sumptuousness of Elizabeth – I’s court and politics. I loved it.” – Jeanne Mackin, award-winning author.

Order a copy at http://getbook.at/reversiblemask